Series forms part of the Ivan R. Kent family fonds and consists of records created and accumulated by members of the Kent family. Included is The History of Pioneer Settling on Kent Island written by E. M. Kent c. 1936 as told to her by her father... 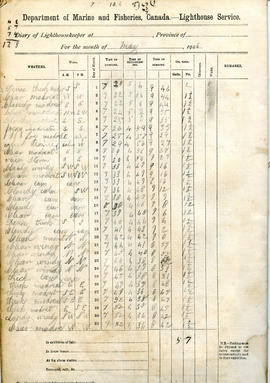 This audio file is an excerpt from an interview with John Lapierre of Grand Desert conducted in August of 1980 by Lena Ferguson and Rosemary Eaton. The audio clip features Mr. Lapierre discussing his experience working on the schooner, the Village...

Fonds consists of one book which was used to record maritime wrecks and casualties in the Port and was also used as a seamen's shipping book, which records the rank and name of crew members and their activities (disembarking in Guysborough, contin...

records of shipping and discharging of seamen. These records include name of seamen, date of arrival, location of last port, name of vessel, and home town. The fonds also includes the Out Port records of Tusket Wedge which consists of date, lot nu...