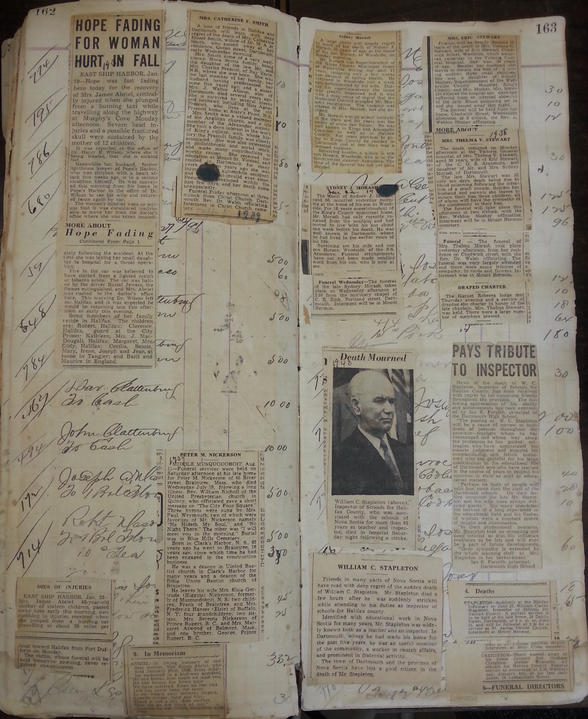 Item consists of one scrapbook, which is actually an old ledger book from a store in Spry Bay, into which clippings have been pasted.

The Leslie family of Spry Bay kept a number of general merchant and produce businesses between the late 1800s to early 1900s and 1969. The store owned by Robert Leslie was closed in that year as well as the gas station.

The scrapbook was made by Glyn Hilchey’s step grandmother, Alice Elizabeth ‘Bessie’ Gerrard. Gyln Hilchey gave the book to Bernice Logan, who later donated it to the Eastern Shore Archives. The scrapbook was delivered to the Archives by Linda Fahie. The original store ledger came from a store in Spry Bay in 1896.

The item was originally a ledger from a store in Spry Bay c. 1896, in which accounts and retail transactions were recorded. The store may have been owned by the Leslie family. Later, around the time of the First World War, Bessie (Gerrard) Hilchey began using the ledger as a scrapbook and pasting newspaper clippings onto the pages, thereby covering most of the original ledger information. The scrapbook dates between about 1905 to 1953 and includes poems, newspaper articles, obituaries, marriage and engagement notices, graduation notices, clippings related to World War I and some small clippings about World War II, articles about horticulture, etiquette, single women and wives, bachelors and husbands, society columns, and articles about notable disasters or accidents including shipwrecks and fires. There are also handwritten notes mainly referring to the weather on the inside of the first page. These notes also record dates that buildings were constructed as well as the Halifax Explosion. Pages 195 to 285 have not been scrapbooked and remain purely accounts of retail transactions made at the store in Spry Bay, including the names of customers.

Some pages are loose and edges are torn. Parts of pages have also been cut out. Clippings are glued to ledger pages and cannot be removed without damaging the ledger and the clippings. Cover is coming apart at the spine. Pages are brittle at the edges.

Delivered to the Eastern Shore Archives by Linda Fahie on behalf of donor, Bernice Logan.

Where possible, clippings have been photocopied and filed by family name in vertical files.