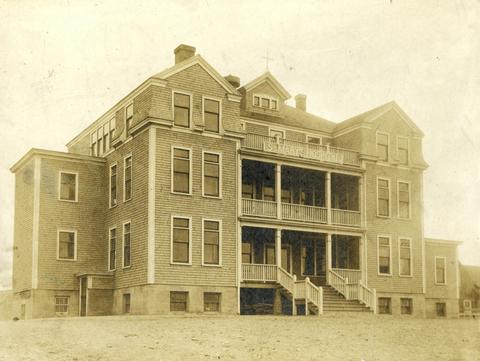 Ernest Samuel Hatt was a Nova Scotian photographer, working around the turn of the twentieth century. He was born in Mill Village, on May 8, 1875, to parents Joseph and Lavinia Hatt. Hatt had his own studio on Central Avenue, Inverness, but he was known to travel to find subjects to photograph. He often traveled from Margaree to Judique with his camera in tow. He photographed local events, as well as, churches, schools, families, weddings, coal miners, firefighters, and musicians. Hatt took daguerreotypes and tintypes. He married Eva May MacIntosh in Cumberland County on July 12, 1904, and he is listed as a photographer on their marriage certificate. Hatt later moved from Inverness to New Waterford, N.S. He died on January 14, 1925 in Scotchtown, New Waterford at 74 years of age.

Item is a photograph of St. Mary's Hospital, Inverness.

Photograph was donated to the Beaton Institute Archives by Msgr. D. MacPherson.