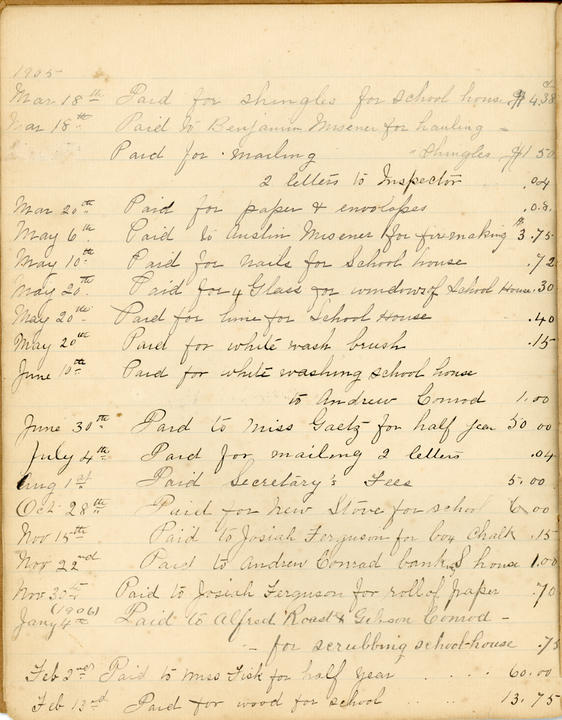 In 1864 the Government of Nova Scotia introduced a new Education Act, which established Nova Scotia's "free" school system, meaning that public schools would no longer charge tuition or attendance fees to students, but would be supported by compulsory local assessment and provincial government grants. Jurisdictions of Nova Scotia’s regional Boards of School Commissioners were laid out and confirmed. These jurisdictions, known as “school districts”, were largely based on county boundaries. The districts were then divided into school sections. Each section was responsible for establishing and maintaining its own school, with a board of trustees elected to oversee its operation. The board of trustees was the smallest unit of school administration, below district boards of school commissioners and the provincial government’s Council of Public Instruction and Superintendent of Education. Annual meetings of the school section’s ratepayers were held to elect trustees who would serve for a period of three years. The elected trustees were responsible for holding all school property, employing and maintaining teachers, making regular visits to the school, maintaining school facilities and equipment, calling regular meetings of the school section’s ratepayers, filing returns with the divisional inspector, arranging for the conveyance of pupils, and later, enforcing the Public Health Act.

The school in Lower East Chezzetcook was located near Christ Church at Conrod Road and likely built between 1867 and 1869 as costs associated with raising the schoolhouse were paid in 1868 and costs for a teacher and school supplies were first paid in 1869. The first school secretary may have been Joseph Ferguson, possibly Joseph John A. Ferguson, of Lower East Chezzetcook who was an Anglican farmer and fisherman, died June 13, 1906 and is buried at Christ Church cemetery.

Fonds consists of records from Lower East Chezzetcook School, specifically secretary and account books documenting the assessments and expenditures of the school including teachers’ salaries and the initial construction of the schoolhouse.

Some torn and loose pages and one book has a missing cover.