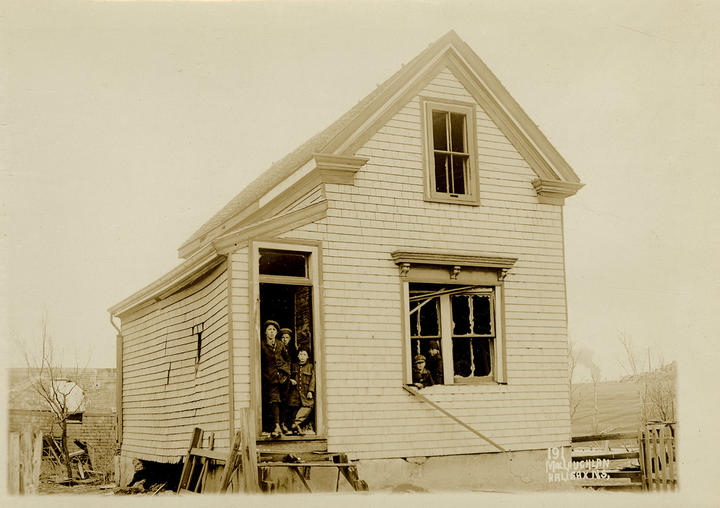 Walter G. MacLaughlan, professional photographer, was born on 9 August 1871 in Charlottetown, Prince Edward Island. After finishing school he moved to Boston, Massachusetts, United States where he opened his first photographic studio and married Ella Jane Murray of Pugwash, Nova Scotia, Canada. He subsequently moved to Pugwash and opened a photographic studio there in 1895. He travelled west circa 1908 and opened a photographic studio in Vancouver, British Columbia, but returned to Halifax in 1914, just prior to World War I, to open a studio at 237 Barrington Street. MacLaughlan was appointed the official military photographer of the City of Halifax and he also began making motion pictures. He appears to have worked for both British-Canadian Pathe News and International Newsreel until late 1922. He was subsequently employed by Fox Films from 1923 to 1926. In 1926 he and his wife moved to Florida for health reasons where he continued to work part-time in still photography until his death on 9 May 1935.

The panoramas were purchased or donated to NS Archives from various persons in multiple accessions over three decades, from 1983 to 2007. The two small albums were donated by the children of Bill and Audrey Allison in 2014.

Collection consists of photographs, including panoramas, of Nova Scotia soldiers in World War I and scenes of the city of Halifax immediately after the Halifax Explosion on December 6, 1917. The images include wide angle views of the North End of the city, the shipyard or ‘graving yard’, and 5x7 images in 2 small albums of individual homes (some with people in doorways), stores, warehouse and a church. The photographs in the albums bear MacLaughlan’s name and a sequential number. Some also have the name of the property owner and street name written in pencil. The fonds also includes large group portraits, mostly of soldiers in the Canadian Expeditionary Force for World War I. Most soldiers are identified by name.

To prevent damage, the 8 tightly rolled panoramas are not accessible.

Additional MacLaughlan photographs can be found in the Harold Medjuck Collection, 1979-199 at 32.4.7. A microfilmed copy of the scrapbook compiled by Bertha MacLaughlan is available Nova Scotia Archives microfilm 10,886.