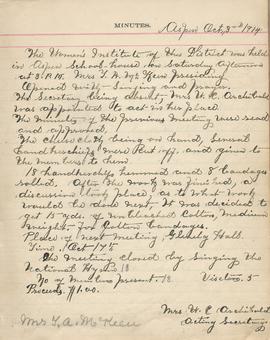 The Women's Institute has its organizational roots in rural Ontario. The first branch was formed in 1897, at a time when rural women lived in isolation and often with little or no education. Farmers had organized as the Farmers' Institute but there was nothing similar for their wives.

With the assistance of Mrs. Laura (Rose) Stephen of Ontario, the first Institute was organized in Salt Springs, Pictou County on 17 July 1913. In 1919, Miss Helen J. MacDougall took over the position of superintendent and remained with the organization for the next 26 years. Also in 1919, the Federated Women's Institutes of Canada (FWIC) was formed to coordinate the work of the provinces and became the national voice for rural women in Canada.

The records were in the possession of Women’s Institute branch executives until deposit with Historic Sherbrooke Village and the St. Mary’s Genealogy Research Centre at Sherbrooke Village. Record books were donated by Women's Institute Guysborough District officials in 2014, 2016, and 2018.

The fonds include 51 books consisting of minutes of meetings, financial accounts, reports, membership lists, lists of directors and officers, and records of attendance. Interleaved within the books are miscellaneous receipts and correspondence. One photograph album with captions showing day-to-day life in the communities of Denver and Newtown (circa 1955), and “A History of the Village of Sherbrooke and Vicinity” (1947), created as part of the Tweedsmuir Village Books national competition.

The Guysborough District of the Women’s Institutes of Nova Scotia established educational programs for local women, held regular meetings and events, and convened district rallies. Early work of the Newtown (later Denver-Newtown), Aspen-Glenelg and Sherbrooke Women’s Institute branches centered on war relief and supporting the Red Cross through knitting socks and wristlets and making handkerchiefs and cheesecloth bandages. On 6 April 1917 the Sherbrooke branch resolved to support women’s right to vote. Meetings were often centered on themes concerning home economics, agriculture, health and welfare, readings and recitations. Lunches were frequently served at meetings, and institute picnics and banquets were popular. The branches evolved over the years in terms of activity and membership, with later members supporting graduating high school students through bursaries.

Some record books are fragile

Open to researchers without restrictions

Nearly all record books for the Guysborough District of the Women’s Institute of Nova Scotia were burnt on June 10, 1964 at the home of Mrs. Everett Kirk, District Secretary.