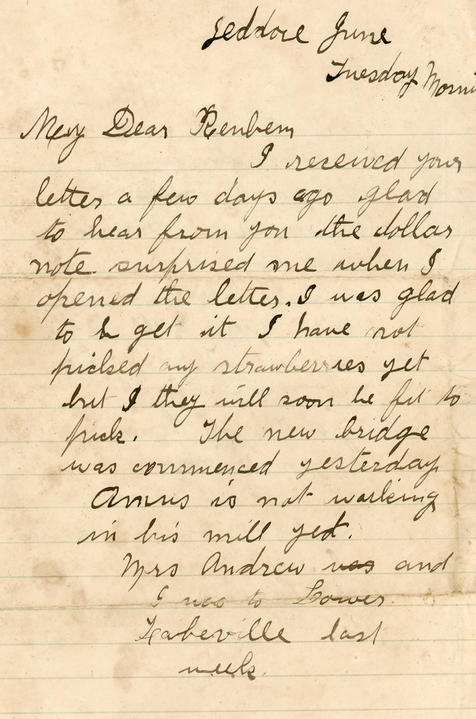 Reuben Herbert Webber was born on November 16, 1870 in Lake Charlotte. He was the eldest child of Sarah A. (Stevens) and Andrew William Henry Webber, who was a farmer at Clam Harbour and Lake Charlotte. He married Susannah Margaret (“Annie”) Newcombe (b. Oct. 11, 1860), daughter of William and Susannah Newcombe in Dartmouth on October 5, 1898. The family lived in Oyster Pond and Reuben worked as a day labourer and miller. He and Annie had one son, Ervin Edward Webber, who was born February 11, 1900. Annie died on March 30, 1917 and Reuben on June 27, 1944.*

Ervin Webber lived in Oyster Pond and worked in the woods and as a farmer, as well as doing odd jobs. He also served as church warden of St. John's Church for fifty years. He never married and died in Halifax on December 1, 1993 as a result of burns that he had sustained.

*Reuben’s death record (which also mentions his son Ervin) states that his parents were William and Sarah. If this is the case, his birth date is November 16, 1870, as appears on the birth record for Reuben, son of Andrew William and Sarah Webber. There was another Reuben Herbert (or Robert) Webber born in Lakeville on November 18, 1870 to William Henry Webber and Eliza Ann Webber, m. January 1869. Robert Kim Stevens lists Reuben Herbert Webber’s parents as being William Henry (b. 1845) and Sarah Jane Webber (m. Dec. 30, 1869, Clam Harbour). He states that she was the daughter of Peter John Webber and Catherine Faulkner and died in 1933.

Some papers in series four are torn and one of the school books has some loose pages.