The collection contains textual records and photographs that demonstrate the activities of several members of the Blaikie Family of Great Village, NS, for almost a century from the mid-1800s to the mid-1900s. Items were arranged into series by the... 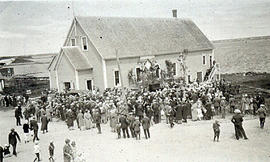 Series forms part of Laura F. Stoddard family fonds and consists of eleven postcards, a Christmas card, and several notes to Hannah, Walter, and Laura Stoddard from various correspondents and from all over the world including Italy, the United Sta...

The fonds consists primarily of correspondence. Other materials include records of business activity including payroll records, insurance policies, completed work records, financial records, and lists of furniture and household effects.

Series forms part of the Burris Russell fonds and consists of an unemployment insurance commission book from 1969-1970 that belonged to Burris Russell. Series also contains a bill of sale dated April 7, 1962 for a fishing boat sold to Wallace Russ...